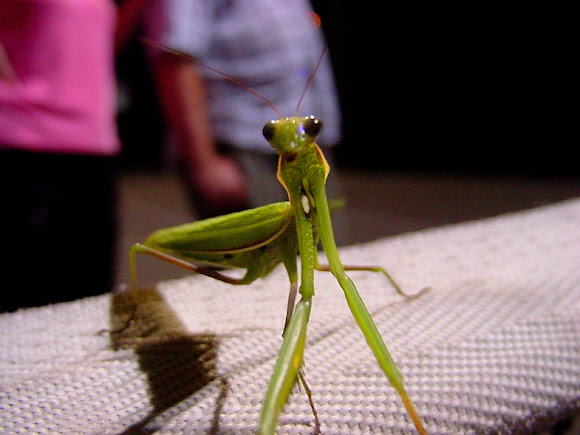 Mantises have two grasping, spiked forelegs ("raptorial legs") in which prey items are caught and held securely. The first thoracic segment, the prothorax, is commonly elongated and flexibly articulated, allowing for greater range of movement of the front limbs, while the remainder of the body remains more or less immobile. The articulation of the head is also remarkably flexible, permitting nearly 300 degrees of movement in some species, allowing for a great range of vision without having to move the remainder of the body.

A colloquial name for the order is "praying mantises", because of the typical "prayer-like" stance, although the term is often misspelled as "preying mantis" since mantises are predatory.

Hi Yulia, this is wonderful! I am sure this is a European Mantis. The black rimmed, white spots on the inside of the front legs are distinctive for the species:
http://bugguide.net/node/view/341867

It would be great if this spotting could be added to the Marvelous Mantids of the North East mission:
http://www.projectnoah.org/missions/1573...

Thank you I tried, although I was afraid how it will react to my flash))

Excellent! I enjoyed your comments as well. A very nicely done sighting!