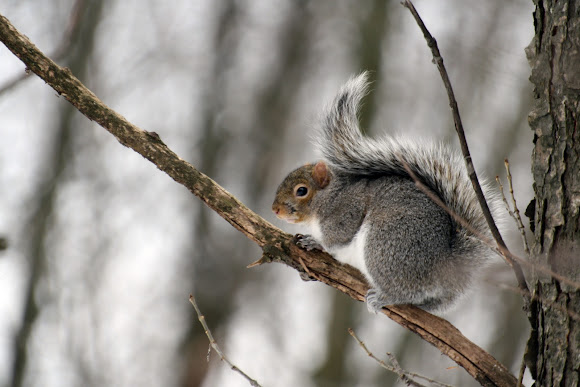 As the name suggests, the eastern gray squirrel has predominantly gray fur but it can have a brownish color. It has a white underside and a large bushy tail. Particularly in urban situations where the risk of predation is reduced, both white- and black-colored individuals are quite often found. The melanistic form, which is almost entirely black, is predominant in certain populations and in certain geographic areas, such as in large parts of southeastern Canada. There are also genetic variations within these, including individuals with black tails and black colored squirrels with white tails. The head and body length is from 23 to 30 centimetres (9.1 to 12 in), the tail from 19 to 25 centimetres (7.5 to 9.8 in) and the adult weight varies between 400 and 600 grams (14 and 21 oz)

In the wild, eastern gray squirrels can be found inhabiting large areas of mature, dense woodland ecosystems, that generally cover 40 hectares of land.[12] These forests usually contain large amounts of dense vegetation that provides sufficient amount of food sources and favorable shelters for eastern gray squirrels. Eastern gray squirrels generally prefer constructing their dens upon large tree branches and within the hollow trunks of trees. They also have been known to take shelter within abandoned bird nests. The dens are usually lined with moss plants, thistledown, dried grass, and feathers. These perhaps provide and assist in the insulation of the den, used to reduce heat loss. A cover to the den is usually built afterwards. Close to human settlements, eastern gray squirrels are found in parks and backyards of houses within urban environments and in the farmlands of rural environments.

Thank you very much MayraSpringmann :) This guy is the hero " Antoine " of my little children's book i wrote .

hihihihi yes :)) it must be to see them digging with their little paw to hide a lunch :)

You're welcome. If the nut is still in a shell the squirrel will have also the option of burying it for later if it's not hungry.

Thank you :) good idea they should prefer hazelnuts. This fall I'll buy a lot of hazelnuts hihihi

Luc, don't feed squirrels peanuts, which are not native to North America and are not natural squirrel food and not even a nut - they're a legume. If you want give them hazelnuts, even better still in the shell. Looking forward to more great squirrel pics!

Thank you !! Gray squirrels are my favorite subjects for the winter. The red too, next winter I'll give them peanuts to get even closer :))

Lovely, with the snow falling from his head. Just beautiful Thanks for sharing. The second picture is also a funny...

thank you very much ,:) yes it is because they searched everywhere with their little noses. In this park they found plenty of food and that's why they are round hahahaha :)

Great picture. Love the snow on his face :)