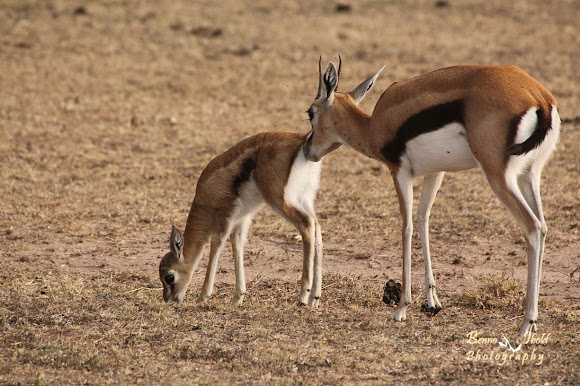 Thomson's gazelle is a relatively small gazelle; it stands 55–82 centimetres (22–32 in) at the shoulder. Males weigh 20–35 kilograms (44–77 lb), while the slightly lighter females weigh 15–25 kilograms (33–55 lb). The head-and-body length is typically between 80 and 120 centimetres (31 and 47 in). Kingdon noted that physical measurements show a decrease from the northern to the southern parts of the gazelle's range. Facial characteristics of the gazelle include white rings around the eyes, black stripes running from a corner of the eye to the nose, rufous stripes running from the horns to the nose, a dark patch on the nose and a light forehead. Close view of a Thomson's gazelle. Note the facial markings and the lateral stripe. The coat is sandy brown to rufous; a distinctive black band runs across the flanks, from the upper foreleg to just above the upper hindleg. A buff band can be seen just above the black stripe. Short black streaks mark the white rump. The black tail measures 15–27 centimetres (5.9–10.6 in).