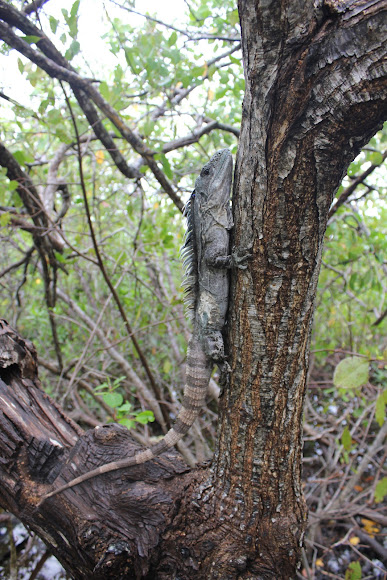 Species endemic to the island of Utila. Mostly relying on blending in with the environment they are not very shy. It is a critically endangered species. The locals like to hunt them. A gravid female is considered a delicacy. Really destructive way of hunting. Also the mangroves are being cut and filled up more and more to be able to build on this land.

Lives in the mangrove forests of Utila. A while back I read somewhere that they are one of the two species of reptiles that solely live in mangroves. They do lay their eggs on the beach though.

You might have noticed the beads through the neck of the lizards in the pictures. This was a way to identify them if we would catch them again. Also some white stuff is visible just in front of the hind leg of the first photo, this is where a transmitter was attached to the iguana. For my internship I researched the behaviour of these beauties.