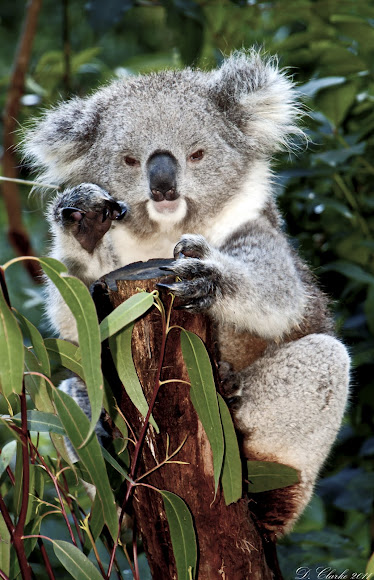 they are often mistakenly called a Koala Bear, when in fact they are not related to the bear family in anyway, they have a pouch simular to the kangaroo

The koala is found in coastal regions of eastern and southern Australia, from Adelaide to the southern part of Cape York Peninsula. Populations also extend for considerable distances inland in regions with enough moisture to support suitable woodlands. Even though they are native to the area This one was photographed in captivity

Thanks Danielle
Will do

Hi DarrenC! If this koala was at the Healesville Sanctuary please add this information to the Habitat field. You can also add it to the Captive animals mission.
http://www.projectnoah.org/missions/7973...

Great photo, so much better than the ones I got while visiting back in 2011. I saw some Koalas at Tidbinbilla Nature Reserve, in ACT, but they were pretty shy it seemed.

LOVE this! My childhood obsession. :-)

Yep, they're basically a great big gut/fermenter for digesting for Eucalyptus leaves, which doesn't leave them much energy for powering their brains.

But don't let their sweet faces fool you, they can be very cranky if disturbed. Also, their closest relative is the wombat, who went the other direction and is actually very active and smart.

Sweet! I learn something new everyday :D Thanks Darren!

its because the gum leaves they eat take a lot of digesting and doesn't provide that much in the form of energy, and they dont eat anythin else.. so they just sleep a lot :)

It is so amazing! I wonder how they are all not too big from the lack of movement...

they are such funny animals, they sleep 16-20 hours a day

thanks for the favorite AshishNimkar