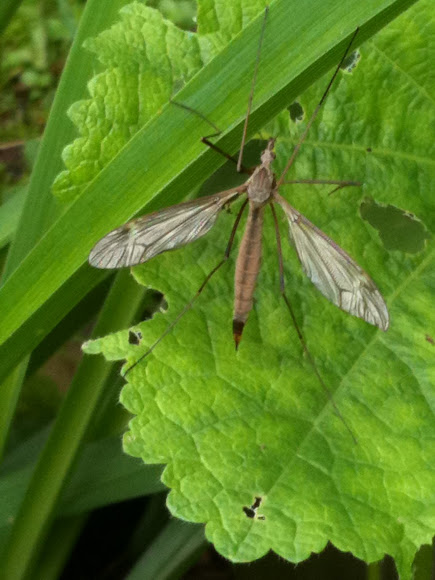 Crane flies are insects in the family Tipulidae. Adults are very slender, long-legged flies that may vary in length from 2–60 millimetres (0.079–2.4 in) (tropical species may exceed 100 millimetres or 3.9 in). In the United Kingdom, Ireland and Newfoundland they are commonly referred to as daddy long-legs, but this name can also refer to two unrelated arthropods: members of the arachnid order Opiliones (especially in the United States and Canada) and the cellar spider Pholcidae (especially in Australia). The larvae of the European Crane Fly are commonly known as Leatherjackets. These larvae can cause damage to lawns by feeding on the roots of grass plants. Numerous other common names have been applied to the crane fly, many of them more or less regional, including mosquito hawk, mosquito eater (or skeeter eater), gallinipper,[1] and gollywhopper.[1] At least 4256 species of crane flies have been described, most of them (75%) by the specialist Charles Paul Alexander. This makes Tipulidae one of the largest families of Diptera (although smaller than Limoniidae, one of the other extant families of crane flies).

Thank you Lori! I'll change the name & add to the description! :D

Actually, it's a type of Crane fly.