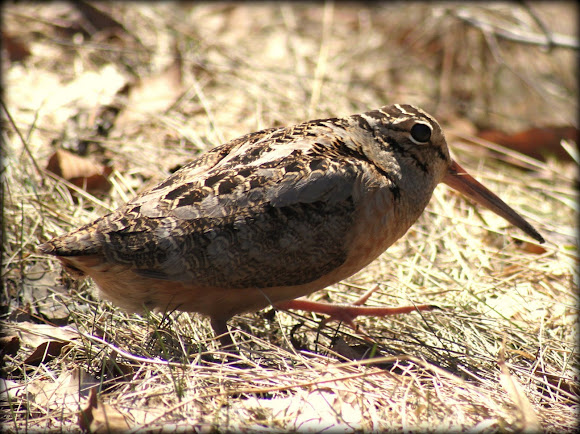 The American Woodcock (Scolopax minor), sometimes colloquially referred to as the Timberdoodle,[1] is a small chunky shorebird species found primarily in the eastern half of North America. Woodcock spend most of their time on the ground in brushy, young-forest habitats, where the birds' brown, black, and gray plumage provides excellent camouflage. Because of the male Woodcock's unique, beautiful courtship flights, the bird is welcomed as a harbinger of spring in northern areas. It is also a popular game bird, with about 540,000 bagged annually by some 133,000 hunters in the U.S.[2] The American Woodcock is the only species of Woodcock inhabiting North America.[3] Although classified with the sandpipers and shorebirds in Family Scolopacidae, the American Woodcock lives mainly in upland settings. Its many folk names include timberdoodle, bogsucker, night partridge, brush snipe, hokumpoke, and becasse.[4] The population of the American Woodcock has fallen by an average of slightly more than 1 percent annually since the 1960s. Most authorities attribute this decline to a loss of habitat caused by forest maturation and urban development.