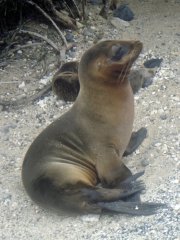 Due to its small-scale occurrence and small, fluctuating population size, and suggested decline of 50% over the last 30 years the Galápagos Sea Lion should be classified as Endangered.