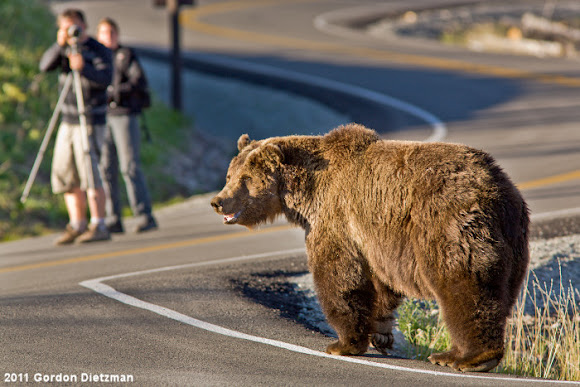 Grizzly bears are large aggressive animals. Color varies from black to blond. Female grizzlies may weigh 150–350 kilograms (330–770 pounds), while males weigh 230–450 kilograms (510–990 pounds). The larger of these sizes are typically the coastal grizzlies, which have rich diet of salmon, while the smaller sized animals are interior grizzlies. There is, however, a great deal of size variation from region to region.

Today mostly mountain forests and alpine meadows, but formerly were found in grasslands as well.

I took this photograph in Yellowstone National Park very early one morning. This large bear, a boar known as Scarface for all the battles he's been in, was digging roots on the side of the road. The people in the background were far too close and had left their car to get a better look and in violation of a park rule that stipulates that you must not approach a bear within 100 yards. (I was in my car parked legally at a turnout when he showed up.) Fortunately, this grand old bear ignored everyone and went on with his business as if we weren't there.

Marta, I've had the very good fortune of watching grizzlies in the wild on many occasions and I've always been amazed by their behavior around people. Any other animal our size that looked catchable would probably provoke an immediate attack. Yet despite the fact that there are thousands of interactions, like the one shown above, between the 350-600 grizzlies in the Greater Yellowstone Ecosystem and its several million annual visitors, only one person on average suffers an injury every other year. There are lots of opportunities for bears to munch people, yet it rarely happens. Yellowstone's bears are pretty well-behaved--often better behaved than the people...grin. This isn't an excuse to approach bears though and Yellowstone like many parks have a 100 meter rule of separation between large predators and people. These are very large, powerful, and aggressive animals and one never knows what the outcome of an encounter will be. When people get hurt, it's not uncommon for the bear to be "controlled", meaning killed.

They are such magnificent animals. I've backpacked in grizzly country and there is a very distinctive feeling to know that you're sharing those environments with these bears. North American wilderness isn't quite the same in those areas where these grand bears once roamed, but are now gone.

Wow!..I was just commenting on how these crazy people kind of thinks that grizzlies in Yellowstone are 'tame' and not so dangerous when in reality you hear of casualties every once in a while..Good that you were wiser and kept your distance. Nice shot :-)

Yes Gordon..Grizzlies are good fishers in river. I saw special film on Grizzly bear made by NGC.

I saw and photographed this same bear at dusk the same day. What a magnificent animal. A friend just got back from Yellowstone and saw him again. It's good to know he's still around.