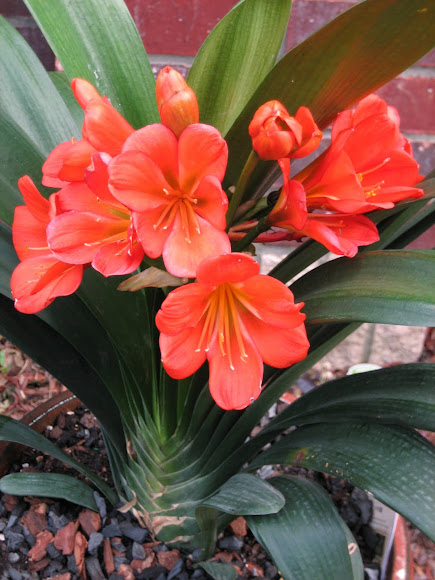 Kaffir Lily is an undemanding and easy-to-grow bulb. While it is generally a slow grower, the plant will eventually become quite large, reaching around 2 feet tall. This plant prefers areas of shade and will thrive in even the darkest corners of the garden. Plant Kaffir lily in masses beneath trees or on the shaded side of your home. It makes a wonderful border plant and is also useful as a container specimen on a shaded patio. Flowers are most common in late winter to early spring, with tall stalks shooting up from the leaves bearing clusters of brightly colored blooms. Their long-lasting flowers are usually orange with yellow centers, but there are scarlet, dark red, salmon, and yellow forms as well.

this one from my yard. Native to South Africa and belonging to the genus Clivia, Kaffir Lily was named after Lady Charlotte Florentina Clive, Duchess of Northumberland, and granddaughter of Robert Clive of India. Some other common names for Kaffir lilies include Bush Lily, St John’s Lily, and Fire Lily. Clivias enjoy much more popularity in Europe, Japan, China, and Australia, where they are commonly known as the “Queen of Houseplants.” Clivia miniata is the most commonly found Kaffir lily in cultivation within the U.S.

A word of caution, in many parts of Africa (especially South Africa), the term “Kaffir” is considered extremely offensive, used to denote people of African origin. All parts of Kaffir lily are somewhat poisonous and may cause mild upset stomach if ingested. Sap from the leaves or roots may also irritate sensitive skin.

thanks for the correct ID