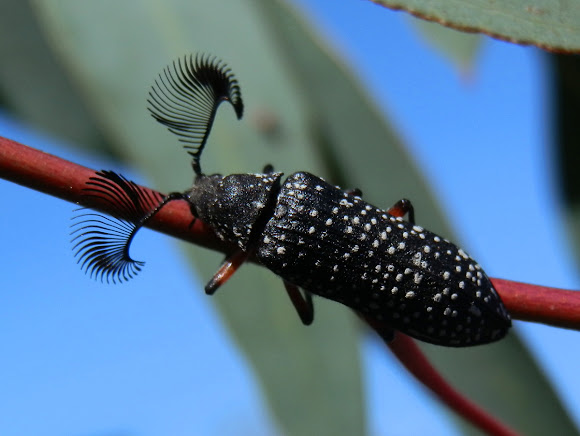 A black wedge-shaped beetle about 15 mm long with white specks on elytra and dramatically flabellate antennae. Legs were a deep brown with black colouring at the femoral and tibial joint. A slightly humped scutellum and head were also black.

Spotted on a young eucalyptus tree in a small reserve.
Occurrence record:
https://bie.ala.org.au/species/urn:lsid:...

There are only six species of Rhipiceridae in Australia and all belong to the genus Rhipicera. Rhipiphorid beetle larvae could be endo- and ectoparasites on larvae of hymenopterans, beetles and cockroaches. Although larvae of R.femorata has never been spotted it is thought that they may be parasites on larvae of Cicada. In some species that have been studied, numerous eggs are laid in flower buds and their hatching corresponds with the blooming of flowers. The 1st instar larvae (Triungulin) attach themselves to the visiting pollinating insect and are taken to the insect's nest where they lie in wait for the host egg to hatch. The parasitic larvae attack the host larvae where they grow without moulting. They feed on the larvae (endoparasitic) and develop within the host larvae finally exiting it to become ectoparasitic, feeding on the host from the outside. They pupate in the host's nest and emerge as adults.
Suborder :POLYPHAGA
Superfamily: DASCILLOIDEA (br) Family :RHIPICERIDAE

Awesome series Leuba,beautigful,congrats on the well deserved SOTD and thanks for sharing

A million thanks everyone. Thanks to Daniele for the added information as well.

Christine, I did not see him fly but there must be a video somewhere...The antennae did not look like they'd weigh him down.

I was very lucky to see him at a way-side stop. Love those antennae...females must be envious !

Congratulations Leuba, your Feather-horned Beetle is our Spotting of the Day:

"He's tiny (15 mm) but he's got reception! This spectacular male Feather-horned Beetle (Rhipicera femorata) is our Spotting of the Day. In male Feather-horned Beetles, the large flabellate (meaning fan-shaped) antennae are used to locate mating pheromones emitted by females. There are six species in the family Rhipiceridae in Australia, all belonging to the genus Rhipicera. Little in known about their life cycle, but as their North American relatives in the genus Sandalus are cicada parasites as larvae it is thought to be the case for Rhipicera as well".

The MnMs 3 years ago

This Beetle, is a masterpiece, of beauty and color, in the insect world....

Beautiful! And I thought carnaval was over...

Fantastic beetle, shots, and information! This guy obviously gets great reception with his antennae! Did you observe it in flight? I’m curious if the huge antennae make it a clumsy flier.