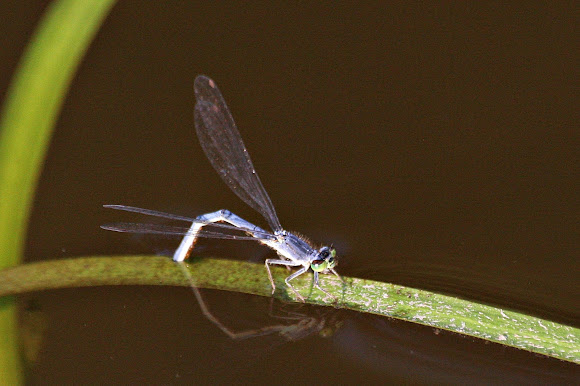 blue . A dragonfly is an insect belonging to the order Odonata, the suborder Epiprocta or, in the strict sense, the infraorder Anisoptera. It is characterized by large multifaceted eyes, two pairs of strong transparent wings, and an elongated body. Dragonflies are similar to damselflies, but the adults can be differentiated by the fact that the wings of most dragonflies are held away from, and perpendicular to, the body when at rest. Dragonflies possess six legs (like any other insect), but most of them cannot walk well. Dragonflies are some of the fastest insects in the world.

I saw him at the edge of river . They are usually found around lakes, ponds, streams and wetlands because their larvae, known as "nymphs", are aquatic.

I think I will separate them, they differ too. Maybe I'll try to photograph them yet these small :))

Ah yes, this is true. What a strange insect. It is not long as I try the macro and I see those little details is really interesting. And I learn every day. thank you :))

These are not dragonflies at all. They are both different damselflies. Dragonfly eyes touch at the top of the head and they hold their wings out from the body in a flat position. These have eyes that don't meet and they are holding their wings vertically.

These dragonflies are not quite the same on the 2 photos. They have a differance, but are all 2 blue. The eyes and legs. Back ...