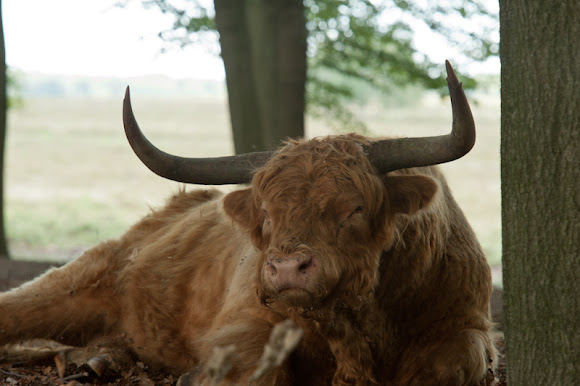 Highland cattle or kyloe are an ancient Scottish breed of beef cattle with long horns and long wavy coats which are coloured black, brindled, red, yellow or dun. The breed developed in the Scottish Highlands and Western Isles of Scotland. Breeding stock has been exported to the rest of the world, especially Australia and North America, since the early 20th Century. The breed was developed from two sets of stock, one originally black, and the other reddish.

Highland Caatle can be found in some national parks in the Netherlands.

@LauraMaria The funny thing is that I was on my knees photographing a beetle about 20 minutes later when this cow (or one of his mates) slowly sneaked on to me. It was about 10 feet away before I noticed.
I can tell you that his horns are quiet impressive from close range,... I decided to disappear rather slow and silent. :-)

Oh he looks tired! I love the floppy hair on the top of his head :) Nice pictures!