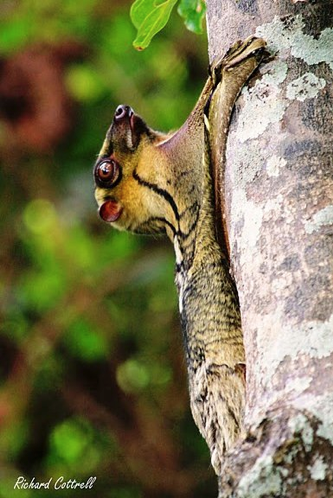 Also known as a Flying Lemur, the Malayan Colugo is a gliding mammal that can move from tree to tree in the rainforest by opening its limbs and gliding, using a kite-like flap of skin, between trees

Tropical Rainforest in the Sunda region and Phillipines also has its own species of Colugo.

Also known as the Malayan Colugo and Malayan Flying Lemur.

Hi Lisa, no its not a true Lemur (they only inhabit Madagascar) but it's one of only two species in its own family called Dermoptera. This comprises of just the Malayan and Phillipine colugo. So they are neither a bat nor a lemur. Just a colugo!

Very cool spotting. I love the natural history info. Is it a true lemur, or is it believed to be a link between the lemurs and flying foxes or something altogether unrelated to either?

alice and nath 11 years ago

Congrats! It's a wonderful picture!

"The Malayan Colugo is a flying lemur that glides from tree to tree by using a kite-like flap of skin while opening its limbs."