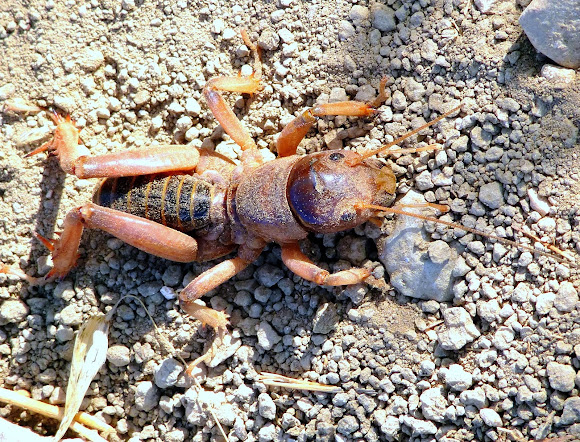 Jerusalem cricket, Stenopelmatus spp., is native to the desert southwest, the western states, and along the Pacific coast. In Spanish it is often called el niño de la tierra—the child of the earth. It has also been called “the old bald man” and the potato bug. There are several myths about this insect. One myth is that Jerusalem crickets are poisonous. They can bite, but usually when they are cornered or when they are picked up. The bite can be painful, but there is no venom delivered.

Tai this specimen was 2 inches long without the length of antenna. With antenna probably 3 to 4 inches.

Thnx, Robby,this specimen seems to be of an older cricket, Shows wear and tear, They are quite attractive looking with the stripes on the abdomen when they are younger.

Tai,Jerusalem crickets have long brown antennae and a large brown head. Their abdomen is black with brown stripes. They are large insects and may be up to 2 inches long.

Great find! What size do you estimate it was?