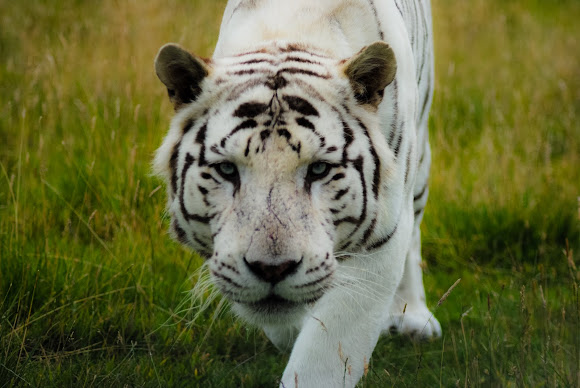 Compared to orange tigers without the white gene, white tigers tend to be larger both at birth and as fully grown adults.[1] In spite of their unusual coloration, their size can be advantageous in the wild. Heterozygous orange tigers also tend to be larger than other orange tigers. Kailash Sankhala, the director of the New Delhi Zoo in the 1960s, said "one of the functions of the white gene may have been to keep a size gene in the population, in case it's ever needed."[2] Dark-striped white individuals are well-documented in the Bengal Tiger subspecies, also known as the Royal Bengal or Indian tiger (Panthera tigris tigris or P. t. bengalensis), and may also have occurred in captive Siberian Tigers (Panthera tigris altaica), as well as having been reported historically in several other subspecies. White pelage is closely associated with the Bengal, or Indian subspecies. Currently, several hundred white tigers are in captivity worldwide, with about one hundred being found in India. Nevertheless, their population is on the increase. The modern white tiger population includes both pure Bengals and hybrid Bengal–Siberians, however, it is unclear whether the recessive white gene came only from Bengals, or if it also originated from Siberian ancestors. The unusual coloration of white tigers has made them popular in zoos and entertainment showcasing exotic animals. German-American magicians Siegfried & Roy became famous for breeding and training two white tigers for their performances, referring to them as "royal white tigers", the white tiger's association with the Maharaja of Rewa. Rewa Maharaja Martand Singh first observed male white tiger Mohan during his visit to Govindgarh jungle at Rewa, Madhya Pradesh, India. After hunting for months, he was able to capture the first living white tiger seen in nature. With help from official veterinary experts, he unsuccessfully tried to breed the white tiger with colored female tigers. Eventually, however, he succeeded in creating a second generation of white tigers. In time, it expanded around the world.

Another shot from the Big Cats enclosure at Hamerton.

It is a great photo!

White tigers do not reach adulthood in the wild because their color leads them to being attacked by other animals or they starve as they cannot hunt without camouflage. All the white tigers in captivity are inbred and most suffer from serious health conditions. The American Zoological Association has now banned the breeding of white tigers are their member zoos. See: http://bigcatrescue.org/abuse-issues/iss...

Not something you see every day in the Jungle. Very Pretty.. :)

That's incredible Peter, I had no idea there are so few left.

The coloration of this tiger is incredible! According to Conservationists, there are only 3200 left in the entire world.