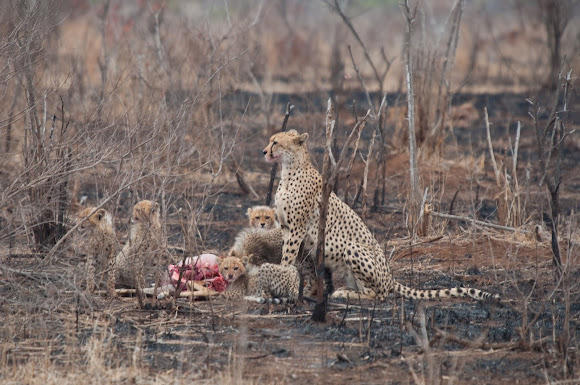 The fastest land mammal, these cats are lean and agile.

Mom and her 5 little ones. We arrived shortly after she had caught an Impala and they were feasting. the breakfast was cut short by the arrival of two adult male Cheetah, who intimidated Mom off the kill. Fortunately the cubs had eaten most of the Impala by the time the bullies arrived. The Game Rangers said that the Males were probably her offspring from an earlier year. We were witness to 8 Cheetah at the same time, an unheard of occurrence.

I can not believe this spot! I have never seen a cheetah in the Kruger! Wow, brilliant, congrats! Im jealous!

5 is a lot of little ones for a cheetah