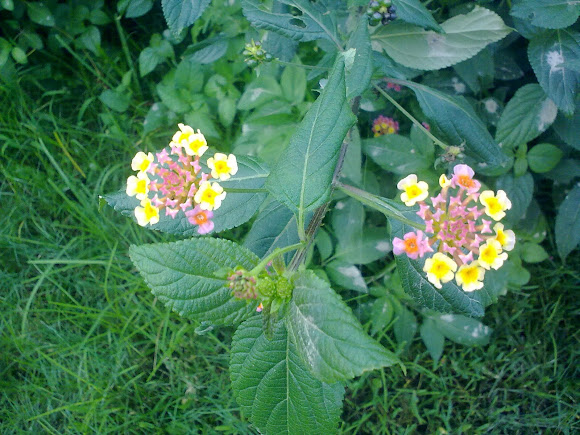 Lantana, Lantana camara, is a weed of national significance to Australia and threatens stock through its toxicity. All lantana should be treated as poisonous to stock. Red flowered varieties are thought to be the most toxic but some white and pink flowered varieties can also be highly toxic. Most lantana poisoning occurs when stock unfamiliar with the plant are introduced to areas where lantana is found. Young animals are most at risk. Stock bred in lantana-infested country tend to avoid it unless forced to eat it through lack of adequate food.

@Christiane..Thanks for the info..i found from the web that its true.

I was told that LANTANA can poison animals. It is a declared weed here in Australia!

I remember eating these:))

@Arun.. This is Common shade Pink and Yellow. Picture is over exposed in sunshine gives Yellow colour whitish look.

I see these all over Nevada and other deserty areas, no clue right now why they are...but so pretty! :-/