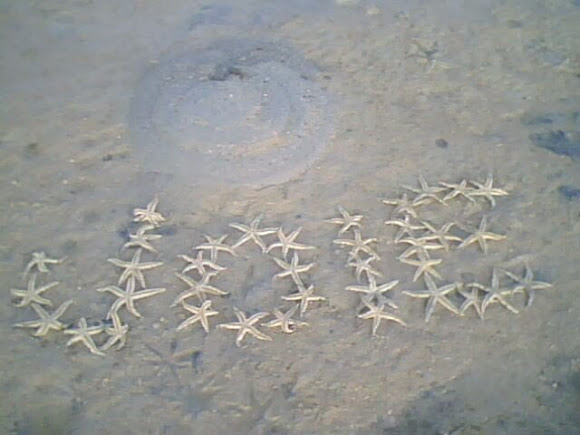 Starfish or sea stars are echinoderms belonging to the class Asteroidea.[2] The names "starfish" and "sea star" essentially refer to members of the class Asteroidea. However, common usage frequently finds "starfish" and "sea star" also applied to ophiuroids which are correctly referred to as "brittle stars" or "basket stars". There are about 1,800 living species of starfish that occur in all the world's oceans, including the Atlantic, Pacific, Indian as well as in the Arctic and the Southern Ocean (i.e., Antarctic) regions. Starfish occur across a broad depth range from the intertidal to abyssal depths (>6000 m).

Starfish are among the most familiar of marine animals and possess a number of widely known traits, such as regeneration and feeding on mussels. Starfish possess a wide diversity of body forms and feeding methods. The extent that Asteroidea can regenerate varies with individual species. Broadly speaking, starfish are opportunistic feeders, with several species having specialized feeding behavior, including suspension feeding and specialized predation on specific prey. The Asteroidea occupy several important roles throughout ecology and biology. Sea stars, such as the Ochre sea star (Pisaster ochraceus) have become widely known as the example of the keystone species concept in ecology. The tropical Crown of Thorns starfish (Acanthaster planci) are voracious predators of coral throughout the Indo-Pacific region. Other starfish, such as members of the Asterinidae are frequently used in developmental biology.

Joie, like your name???
For a moment I thought I read "voie" (voice)
Nice spotting :)