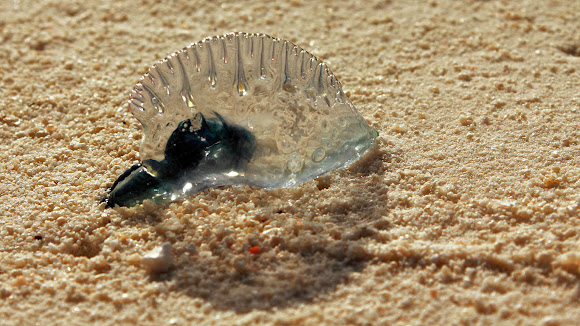 Despite its outward appearance, the Man o' War is not a true jellyfish but a siphonophore, which differ from jellyfish in that they are not actually a single creature, but a colonial organism made up of many minute individuals called zooids.[1] Each of these zooids is highly-specialized and, although structurally similar to other solitary animals, are attached to each other and physiologically integrated to the extent that they are incapable of independent survival. (Wikipedia)

Tropical and subtropical regions of the Pacific and Indian oceans, and the northern Atlantic Gulf Stream.

Spotted on the Maldives, where it is not supposed to be

I have never seen one, but the picture next to the feet finally gave me the scale of these. Always thought they where bigger, at least the size of a fist.
Thanks

What an extraordinary creature it is! Great find!

Awesome creature! And awesome too why it arrived to Maldives. Could you add this spot to the mission "Maldives Biodiversity". http://www.projectnoah.org/missions/1084...

Hey, could you please tell me where exactly was this found in the Maldives... i am a maldivian and would like to know more about it... thanks...

Interesting - encountered them in many warm waters!

It's an interesting fact that you spotted it where is not supposed to be.

we ge these alot in NZ beaches, spesh in and around chch, we call them bluebottles, they wash up constantly some times you cant even go swimming because there are to many of them

"Mistaken for jellyfish, the Portuguese Man 'o War is actually a colony of venom-filled tentacles and polyps. It has no real means of propulsion and drifts in the ocean current."

That third pic is awesome! Looks like a translucent mohawk.