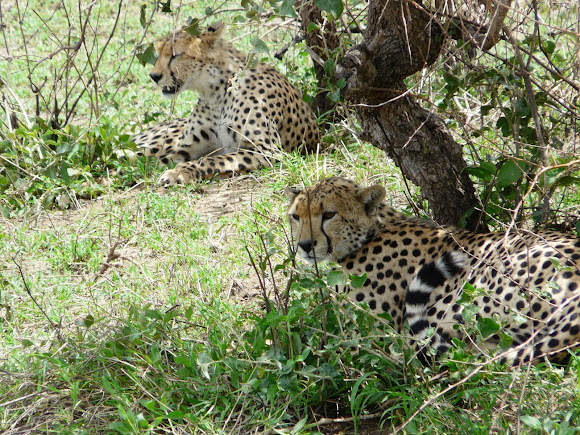 The cheetah is a large-sized feline inhabiting most of Africa and parts of the Middle East. The cheetah is the only extant member of the genus Acinonyx, most notable for modifications in the species' paws. As such, it is the only felid with non-retractable claws and pads that, by their scope, disallow gripping (therefore cheetah cannot climb vertical trees, although they are generally capable of reaching easily accessible branches). The cheetah, however, achieves by far the fastest land speed of any living animal—between 112 and 120 km/h (70 and 75 mph) in short bursts covering distances up to 500 m, and has the ability to accelerate from 0 to over 100 km/h (62 mph) in three seconds. Adaptations that enable the cheetah to run as fast as it does include large nostrils that allow for increased oxygen intake, and an enlarged heart and lungs that work together to circulate oxygen efficiently. During a typical chase, its respiratory rate increases from 60 to 150 breaths per minute. While running, in addition to having good traction due to its semi-retractable claws, the cheetah uses its tail as a rudder-like means of steering to allow it to make sharp turns, necessary to outflank prey animals that often make such turns to escape. Unlike "true" big cats, the cheetah can purr as it inhales, but cannot roar. By contrast, the big cats can roar but cannot purr, except while exhaling. The cheetah is still considered by some to be the smallest of the big cats. While it is often mistaken for the leopard, the cheetah does have distinguishing features, such as the aforementioned long "tear-streak" lines that run from the corners of its eyes to its mouth, and spots that are not "rosettes". The thinner body frame of the cheetah is also very different from that of the leopard. The cheetah is a vulnerable species. Of all the big cats, it is the least able to adapt to new environments. It has always proved difficult to breed in captivity, although recently a few zoos have managed to succeed at this. Once widely hunted for its fur, the cheetah now suffers more from the loss of both habitat and prey.

We were exceptionally lucky to find these 3 male cheetahs - with the exception of females with cubs the cheetah are usually a solitary animal, but brothers will stay together & these small family groups have much greater success at hunting & defending their territory.

Yes they are very graceful and
The cubs are so wonderful!

It's my favorite too ! I find them so graceful & the cubs are just adorable!