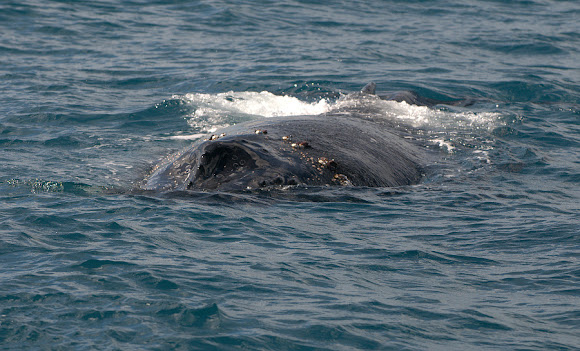 One of the larger rorqual species, adults range in length from 12–16 metres (39–52 ft) and weigh approximately 36,000 kilograms (79,000 lb). The humpback has a distinctive body shape, with unusually long pectoral fins and a knobbly head. It is an acrobatic animal, often breaching and slapping the water. Males produce a complex song, which lasts for 10 to 20 minutes and is repeated for hours at a time.

Once hunted to the brink of extinction, humpbacks are now sought by whale-watchers, particularly off parts of Australia, New Zealand, South America, Canada, and the United States.

Thank you very much for your comments!
Of course you can youse the fluke photos and you can find some more on my flickr.

Great shots of these beauties Julius. Can't wait to have one myself. The one's we spotted here in the Philippines last year, my point and shoot water casing fogged up and the video was just not of quality. Will have to take a dslr next time :-)

I work for Allied Whale
http://www.coa.edu/html/nahc.htm
They have a very large catalog of whales using the North Atlantic but also are building a Southern Oceans catalog, a public version is on flickr: http://www.flickr.com/photos/ahwc/

Would you be interested in participating by allowing us to take your fluke photos through the catalog to try and find a match and if we can't letting us add you whale to the catalog?

Great collection of photos, its still my dream to see a whale! One day... I would favourite all your pictures but wouldn't want to spam the home page ha ha. Great album.