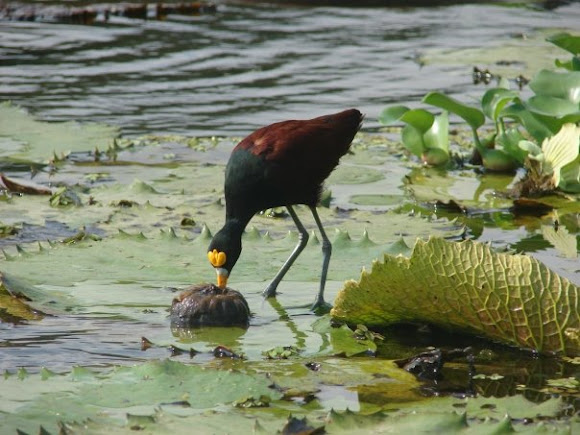 The northern jacana has a dark brown body with a black head and neck. In addition its bill has yellow patches and its forehead has a wattle.It’s bill has a white base. When a jacana is in flight, its yellow primary and secondary feathers are visible. Juveniles have a white supercilium and white lores. The female jacana is around twice as big as the male, averaging (145.4g) compared to (86.9g).Jacanas average 241 mm in length with a wingspan averaging 508 mm.

The northern jacana ranges Mexico to Panama, although they occasionally visit the southern United States.It mainly lives in coastal areas. Jacanas live on on floating vegetation in swamps, marshes, and ponds. They will feed on insects on the surface of vegetation and ovules of water lilies.They will also consume snails, worms, small crabs, fish, mollusks, and seeds. The jacana competes with birds of a similar diet like the Sora. Predators of the jacana include snakes, caimans, snapping turtles and various large birds and mammals.The purple gallinule preys on jacana eggs and offspring. Jacanas commonly attack gallinules that enter their territory.

Fue un viaje que realizamos sobre el lago de catemaco donde pudimos observar esta hermosa ave. It was a travel that we made to Veracruz, in the place of Catemaco, where we can find this beautiful example.