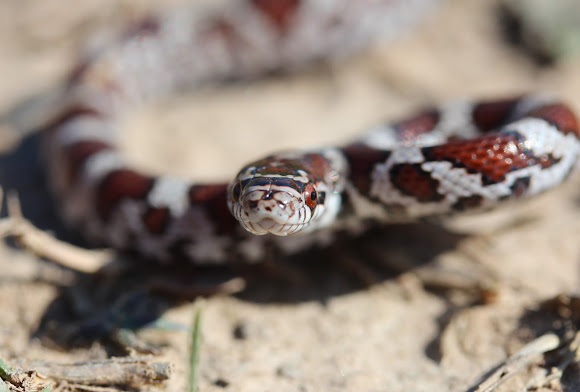 This snake was extremely aggressive. It kept striking at me while I was taking its photo. Some milk snakes have a striking resemblance to coral snakes and this mimicry (known as Batesian mimicry) likely scares away potential predators. However, the Eastern milk snake (L. t. triangulum) does not resemble a coral snake; instead it tends to have similar markings to that of several other snakes, particularly the fox snake, scarlet snake and most importantly, the Massassauga rattlesnake.

Across the wide range of this species, habitat varies. Typically, milk snakes live in forested regions

I spotted this at Fireman's park along a trail close to Mewburn Rd. It's one of the most aggressive snakes I've ever seen. It was also the first time I was able to see and photograph this species.

Thanks everybody! These small snakes do seem to have something to prove. This snake was as equally as aggressive a northern brown snake I spotted a few months ago.
http://www.projectnoah.org/spottings/628...

Beautiful pictures of a lovely snake!! Those smaller non-venomous snakes seem to have a lot more to prove :)