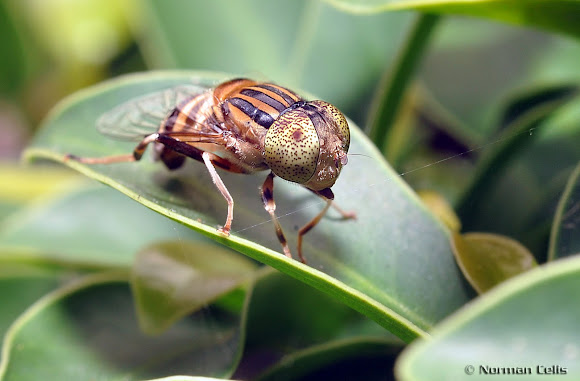 Hoverflies, sometimes called flower flies or syrphid flies, make up the insect family Syrphidae. As their common name suggests, they are often seen hovering or nectaring at flowers; the adults of many species feed mainly on nectar and pollen, while the larvae (maggots) eat a wide range of foods. In some species, the larvae are saprotrophs, eating decaying plant and animal matter in the soil or in ponds and streams. In other species, the larvae are insectivores and prey on aphids, thrips, and other plant-sucking insects.

Hoverflies are a cosmopolitan family found in most biomes excluding deserts and the tundra at extremely low latitudes, in Antarctica. Certain species are more common in certain areas than others; for example, the American hoverfly, Eupeodes americanus, is common in the Nearctic ecozone, and the Common hoverfly, Melangyna viridiceps, is common in the Australasia ecozone. There are about 6,000 species and 200 genera in the family. Larvae of hoverflies are often found in stagnant water. Adults are often found near plants, their principal food source being nectar and pollen. Some species are found in more unusual locations; for example, members of the genus Volucella can be found in bumblebee nests, while members of Microdon are myrmecophiles, found in ant or termite nests. Others can be found in decomposing vegetation.

thanks JohanHeyns for the ID..

Wow, what a super image Norman!