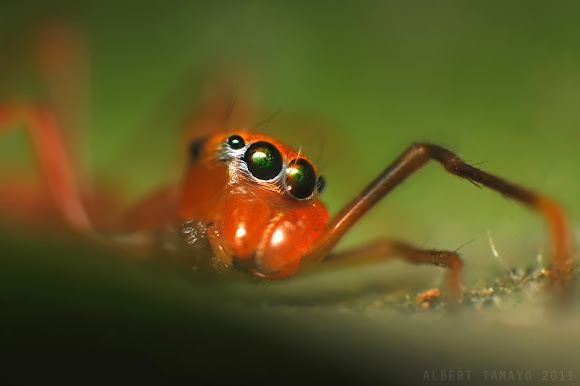 The female Kerengga Ant-like Jumper is the same size, shape and colour of its model. The spider also walks like the weaver ant and only jumps when its safety is threatened. However, unlike the weaver ant, M. plataleoides does not bite people, and indeed seem rather timid. By developing several constrictions around the cephalothorax and abdomen, M. plataleoides creates the illusion of having the distinct head, thorax and gaster of the weaver ant, complete with a long and slender waist. Two black patches on the head mimic the weaver ant’s large compound eyes. These patches hid real eyes – the tiny posterior-lateral eyes. Like other jumping spiders, M. plataleoides has four pairs of eyes, the largest being the anterior-median eyes. As a final touch to the disguise, the spider often holds up its two front legs like a pair of antennae.

These are some of my photos of the ant-mimic spider first spotted way back 2008. They mimic the weaver ants.