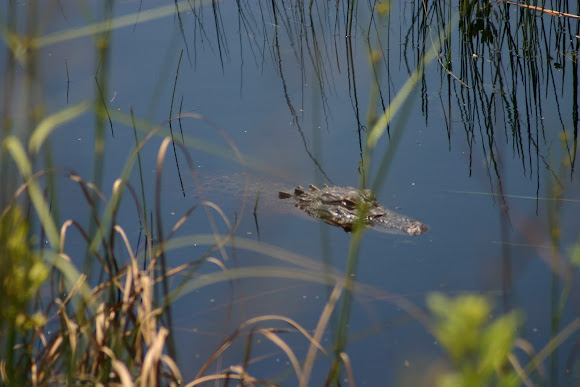 Sometimes referred to colloquially as a gator, is a reptile endemic only to the Southeastern United States. It is one of the two living species of alligator, in the genus Alligator, within the family Alligatoridae. It is larger than the other extant alligator species, the Chinese alligator.

American alligators are mostly found in the Southeastern United States, from Great Dismal Swamp in North Carolina south to Everglades National Park in Florida and west to the southern tip of Texas. They are found in the U.S. states of North Carolina, South Carolina, Georgia, Florida, Louisiana, Alabama, Mississippi, Arkansas, Texas, and Oklahoma. Florida and Louisiana currently have the largest population of alligators. Florida has an estimated population of 1 to 1.5 million while Louisiana has an estimated population of 1.5 million Although primarily freshwater animals, alligators will occasionally venture into brackish water.[14] Alligators live in wetlands and this is the vital habitat that holds the key to their continued long-term survival. Alligators depend on the wetlands, and in some ways the wetlands depend on them. As apex predators, they help control the population of rodents and other animals that might overtax the marshland vegetation. American alligators are less prone to cold than American Crocodiles. Unlike the American Crocodile, which would immediately succumb to the cold and drown in water of 45 °F (7.2 °C), an alligator can survive in such temperatures for some time without any signs of evident discomfort.[15] It is thought that this adaptiveness is the reason why American alligators spread farther north than the American Crocodile.[15] In fact, the American alligator is found farther from the equator and is more equipped to deal with cooler conditions than any other crocodilian.[16] In Florida, alligators face ambient temperature patterns unlike elsewhere in their range. The consistently high temperatures lead to increased metabolic cost. Alligators in the Everglades have reduced length to weight ratio, reduced total length, and delayed onset of sexual maturity compared with other parts of their range. The reason for this poor condition is currently suspected to be a combination of low food availability and sustained high temperatures.