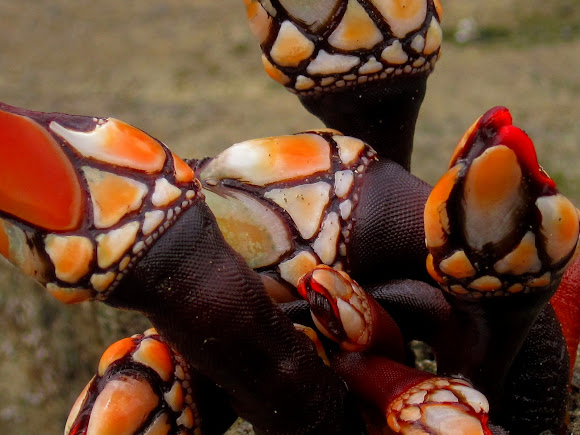 From Wikipedia: Pollicipes pollicipes grows in groups on rocks, as well as on the hulls of shipwrecks and on driftwood. It is a filter feeder, living on particles that it can glean from the water passing over its extended cirri; these possess a complex assortment of setae, enabling P. pollicipes to have a varied diet, including diatoms, detritus, large crustaceans, copepods, shrimp and molluscs. The larvae pass through seven free-swimming stages (six nauplii and one cypris) over the course of at least a month. After this time, they settle into the adult, sessile form. P. pollicipes is harvested for consumption in many parts of its range, mostly for the Spanish market, where it may sell for as much as €90 per kilogram. As a result, the species is thought to be in decline. It is harvested manually, and archaeological evidence suggests that the species has been harvested in this way for over 10,000 years.

From Wikipedia: Pollicipes pollicipes is chiefly distributed from 48°N to 28°N, along the coasts of France, Spain (including the Canary Islands), Portugal, Morocco, and south to Senegal, with a further population disjunctly located around the tropical Cape Verde Islands at about 16°N. The periphery of the species' range also extends as far north as the British Isles, with outlying populations on the south coast of England and possibly in southwestern Ireland, although there are no recent records there. The species is present, but rare, in the Mediterranean Sea. It is possible that the outlying populations are not self-sustaining, being instead maintained by immigration of larvae from self-sustaining core populations.

Found this today when I was out jogging on the beach. Thought it was a interesting shell formation. I picked it up and saw that it was actually alive. At each tip, there is a creature and in the picture you can see a few emerging. They never came out, perhaps because I was hovering over them. Anyways, it or they (not sure) had a weird texture, like fish skin or something. So before I threw it back into the ocean I ran and grabbed my camera, posed it in the rocks, and snapped away. Later when I return to my cabina, my landlord, who is a Tica, recognized the picture and gave me some Spanish name for it. She also said they eat them! Yikes!

It is the best photo I have seen of these creatures. I looked them up so I could find what the heck I was looking at and all the images of them did not have the brilliant colors of the one's I have found.

Since these were a delicacy I tried to hide where I found these exactly.

I am glad you enjoyed my photos. Take care.

What a strange looking animal. I love it lol

Great photos! Barnacles are arthropods by the way :)

Wow, really cool! Have never seen anything like this before so thanks for sharing with us!

Hi Gaiea, Cool huh? I didnt have my camera when I first saw them and had to run a mile, round trip to get it. But worth it. I had no idea they were edible and very expensive, people risk their lives to get at them as they are usually not laying on a beach but beneath the water on large rocks. I threw them back and hope they found a new home safe from 'the people'..lol.

Woah that is crazy looking! I didn't know what I was looking at ha ha. But now I do - thank you for expanding my knowledge!

This is such an amazing spotting!

What a protective Goose neck ! and pretty colors. well spotting.

I was in costa rica about ten years ago and never got to see anything like this, amazing colors and detail in the photos.

and 229 other people favorited this spotting