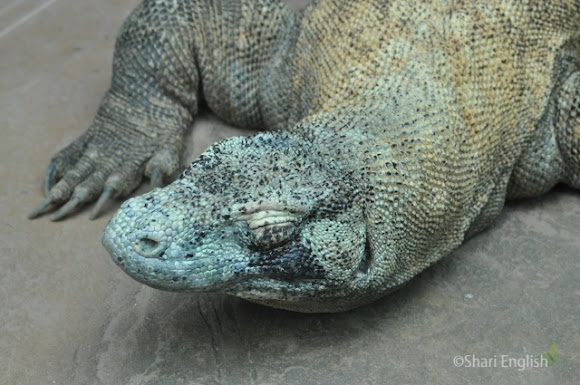 A member of the monitor lizard family the Komodo Dragon is the largest living species of lizard and can grow up to 3m long and can weigh up to 70 kilograms and it has a tail that is as long as its body, Due to their size and lack of predators these lizards dominate their ecosystem. These lizards are hunters and will ambush their prey which include everything from invertebrates to large mammals. They have a mouthful of serrated teeth and a bacteria that prevents wounds from healing which is a hunting tactic. Also somewhat uncharacteristic for reptiles is their group hunting behaviour.

This is a captive animal, spotted at Australia Zoo on the Sunshine Coast. QLD. Such an extraordinary animal, so similar to the Lace Monitors native to Australia yet so much bigger. Just a look at them and you know you shouldn't mess with them.