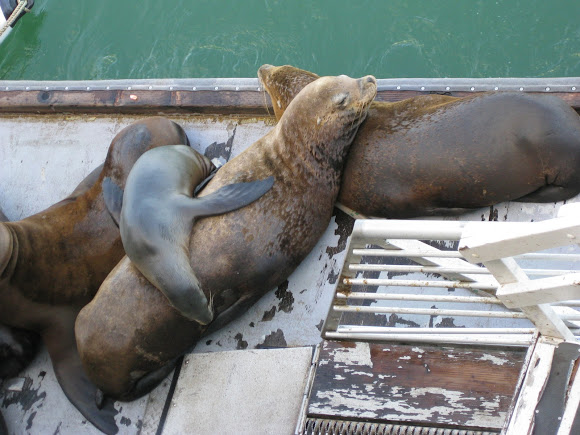 California sea lion males grow to 850 lbs and 2.4 meters (8 ft) long, while females are significantly smaller, at 220 lbs and 2 meters (6.5 ft) long. They have pointed muzzles, making them rather dog-like. Males grow a large crest of bone on the top of their heads as they reach sexual maturity, and this gives the animal its generic name (loph is "forehead" and za- is an emphatic; Zalophus californianus means "Californian big-head"). They also have manes, although they are not as well developed as the manes of adult male South American or Steller sea lions. Females are lighter in color than the males, and pups are born dark, but lighten when they are several months old. When it is dry, the skin is a purple color. A sea lion's average lifespan is 17 years in the wild, and longer in captivity. By sealing their noses shut, they are able to stay underwater for up to 15 minutes.

California sea lions prefer to breed on sandy beaches. They usually stay no more than 10 miles out to sea. On warm days, they stay close to the water's edge. At night or on cool days, the sea lions will move inland or up coastal slopes. Outside of the breeding season, they will often gather at marinas and wharves, and may even be seen on navigational buoys. Sea lions living around islands are less vulnerable to predation than coastal ones. The sea lion's major predators are killer whales and white sharks. California sea lions can also live in fresh water for periods of time. They feed on Pacific salmon in front of Bonneville Dam, 146.1 river miles from the Pacific Ocean. Historically, sea lions hunted salmon in the Columbia River as far as The Dalles and Celilo Falls, 200 miles (320 km) from the sea, as remarked upon by people such as George Simpson in 1841. In 2004, a healthy sea lion was found sitting on a road in Merced County, California, almost a hundred miles upstream from San Francisco Bay and half a mile from the San Joaquin River.

I spotted these sea lions at the Wharf in Santa Cruz, CA.