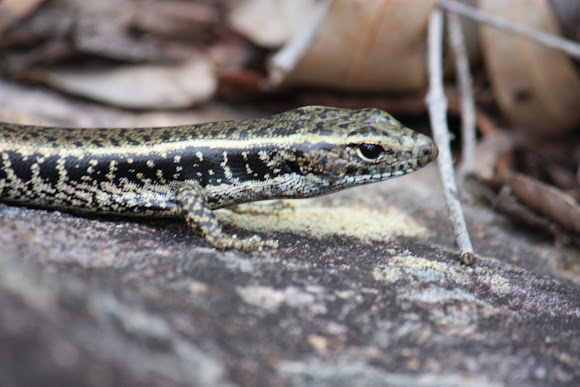 The eastern water skink is a relatively large skink, some specimens reaching nearly 30cm in length. They are fast, active, streamlined lizards which are recognised by their shiny scales and beautiful green-gold colour on the back. The sides are black with small white spots, while the underside is white or pale grey. Adults defend a territory, often to the point of conflict, although this is usually avoided by the resident lizard warning off potential trespassers with a complex series of head-bobbing movements.

The eastern water skink lives near the streams, creeks and waterways of coastal eastern Australia, from Cooktown in the north to the south coast of New South Wales. It does extend inland in some areas, particularly in association with the major river systems, such as the Murray-Darling. They are common near streams and creeks in bushland around Sydney, even in suburban areas.