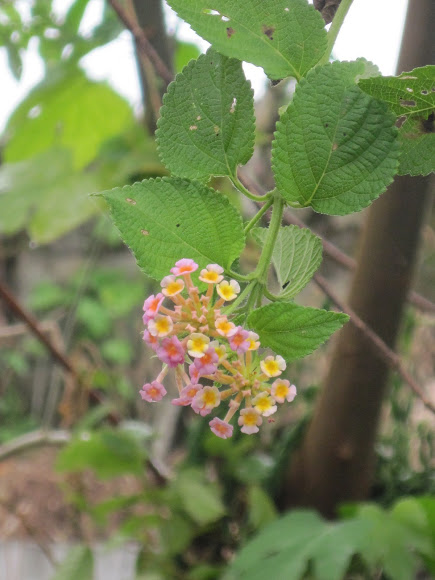 Lantana camara, also known as Spanish Flag or West Indian Lantana, is a species of flowering plant in the verbena family, Verbenaceae, that is native to the American tropics.[2][3][4] It has been introduced into other parts of the world as an ornamental plant and is considered an invasive species in many tropical and sub-tropical areas.[5] L. camara is sometimes known as "Red (Yellow, Wild) Sage", despite its classification in a separate family from sage (Lamiaceae), and a different order from sagebrush (Asterales).

The native range of Lantana camara includes Mexico, Central America, the Greater Antilles, The Bahamas, Colombia, and Venezuela.[1] It is believed to be indigenous to the Lower Rio Grande Valley of Texas in the United States.[6] It has become naturalized in tropical and warm regions worldwide.[7] In the Kenyan highlands it grows in many areas that receive even minimal amounts of rainfall. It can be seen in the wild and along footpaths, deserted fields, and farms.[8] West Indian Lantana has been naturalized in the United States, particularly in the Atlantic coastal plains, from Florida to Georgia, where the climate is close to its native climate, with high heat and humidity.[3] It was introduced into the Philippines from Hawaii through the Makiling Forestry School (now the University of the Philippines Los Baños College of Forestry and Natural Resources), as part of botanical academic exchanges between the United States and the Philippines. It escaped into the wild and has become naturalized in the islands.[9] It is referred to by a number of common names including coronitas ('coronet'), utot-utot ('fart [flower]'), and baho-baho ('smelly [flower]'), the last two referring to its distinctive pungent odor.[10] It has also become a major weed in Sri Lanka after escaping from the Royal Botanic gardens of Sri Lanka in 1926.[9]