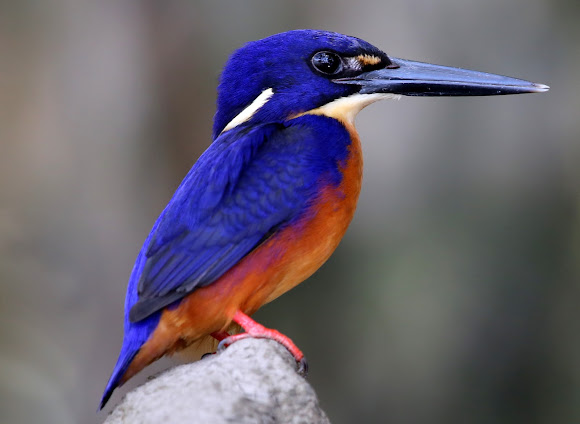 The Azure Kingfisher is a small kingfisher with a long slender black bill and a short tail. The head, neck, upper parts and breast sides are deep azure blue with a violet (purplish) sheen. The neck has a distinctive orange stripe on each side and there is a small orange spot before each eye. The throat is pale orange-white, grading to orange-reddish on belly and undertail. The flanks and sides of the breast are washed purple to violet. The legs and feet are red. The sexes are similar. Young birds have a darker cap and are generally duller. 16–19cm in length, weighing about 40g and with a wingspan of 25–29cm

Feeding: The Azure Kingfisher plunges from overhanging perches into water to catch prey. Prey items include: fish, crustaceans, aquatic insects and other invertebrates, and, sometimes, frogs. They will often bash their prey against the perch before swallowing it head first. Often watch Platypuses foraging underwater and catch any food items that are disturbed. Breeding: Azure Kingfishers form monogamous pairs that defend a breeding territory. Both parents incubate and feed the chicks. The nest is at the end of a burrow dug out of soil in a riverbank. The tunnel slopes upwards to the nesting chamber and can be 80 cm - 130 cm long. Flooding can destroy low-lying burrows.

I think I can almost see the photographer's reflection in the bird's eye...WoW-shot.

Nature certainly knows how to use the colour palette for the most impact. Great photos.

What a beauty - where exactly? Kingfishers are my nemesis, I swear!

Thanks Scott, I got to about 2 meters from this one,

great shots, they never let me get close enough

Wow Mac awesome spotting,great colours congrats and thanks for sharing