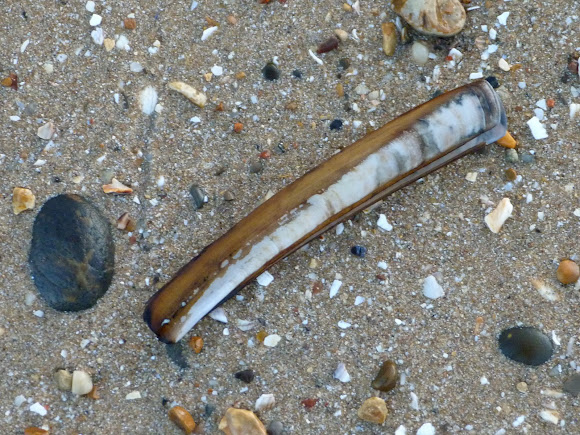 The razor shell, Ensis arcuatus, also called razor clam or razor fish, is a bivalve of the family Pharidae. It is found on sandy beaches in Northern Europe and Eastern Canada. It is known for its elongated, rectangular shape, whose similarity to the straight razor gives it its name. The razor shell has been known to reach 9.1 inches in length. Razor shells have a fragile shell, with open ends. The shell is smooth on the outside and whitish in color, with vertical and horizontal reddish-brown or purplish-brown markings separated by a diagonal line. The periostracum is olive-green. The inner surface is white with a purple tinge and the foot is creamy white with brown lines .

The razor shell lives under the sand, using its powerful foot to dig to a safe depth. Its foot is inflated hydraulically, extend down into the sand and anchoring the animal. Deflation of the foot then draws the shell down. The razor shell also squirts water down into the sand, removing loose sand from its path. The foot is thought to exert a pressure of 2 kg/cm2 Its presence is revealed by a keyhole-shaped hole in the sand, made by its siphons during suspension feeding for plankton.

Empty shell found on the beach at Minster-on-sea in Kent.