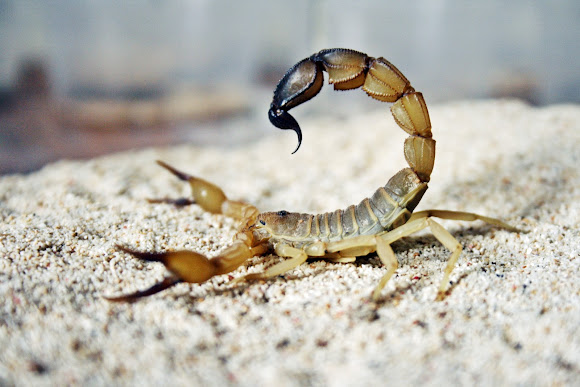 Yellow fat-tail (Androctonus australis) - This scorpion is known as the Fat Tailed Scorpion, due to its powerful cauda. 10-12 cm. The adult of this species is uniformly pale yellow, with fingers and the end of the metasoma darker. Pectines of the female with 22 to 29 teeth, male's ones with 30 to 38 teeth.

This scorpion is found in dry habitats/desert areas. It is found in stony soils, catus hedges, arid mountainous regions and high plateaux. It can also be found on steep slopes of drifting sand dunes. It avoid humid costal areas. The scorpion dosen't dig large burrows, but hide under stones and in natural crevices. This species is unfortunately often found near human habitations (in cracks in walls etc. made of stones and bricks).

This is one of the worldst most dangerous scorpion, with a very potent venom. This species are medical important, and cause several deaths each year. Two different sources list LD 50 values of 0.32 and 0.75 mg/kg. -the scorpion files