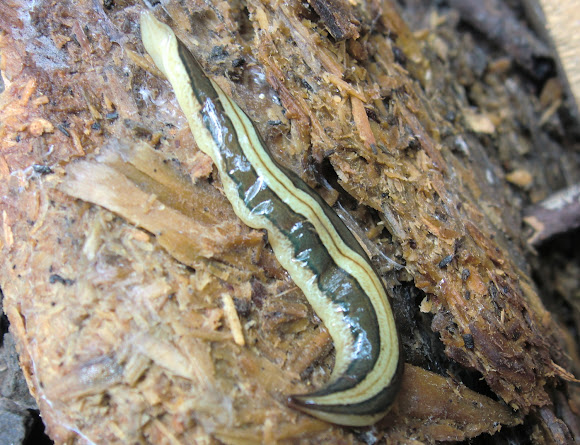 Platyhelminthes, Tricladida, Geoplanidae, Geoplaninae.... Flatworms range between 1 and 20 cm in size, and are predators of other invertebrates such as earthworms, snails, slugs, insects and chelicerates, which they hunt for, attack and capture using physical force and the adhesive and digestive properties of their mucus. They lack water-retaining mechanisms and are therefore very sensitive to humidity variations of their environment. Because of their limited ecological requirements, some species have been proposed as indicators of the conservation state of their habitats. They are generally animals with low vagility and with very specific habitat requirements, so they can be also used to accurately determine the distribution of biogeographic zones. Today the fauna of these mostly rather fragile animals is being used to select conservation priorities in the Atlantic rainforest in southern Brazil. At the other extreme, one species in this family, Platydemus manokwari has become an invasive species in both disturbed and wild habitats in the Pacific Islands, and has damaged the endemic land snail faunas. Despite their delicate aspect these terrestrial flatworms are voracious predators. All planarians feed through a muscular and reversible pharynx located in ventral side of the body. The pharynx is an extensible tube-like mouth, it bears complex muscular coat that specialized as a penetration organ for those planarians that feed on arthropods; or as a grasping for those planarians that feed on other soft bodied invertebrates such as earthworms. Pharynxes are equipped with glandular secretions that externally digest and dissolve their prey. May 2012 found a translucent blue one not far away. http://www.projectnoah.org/spottings/105...

This one is gorgeous Mark, also the blue one.

A blue one was found nearby. http://www.projectnoah.org/spottings/105...