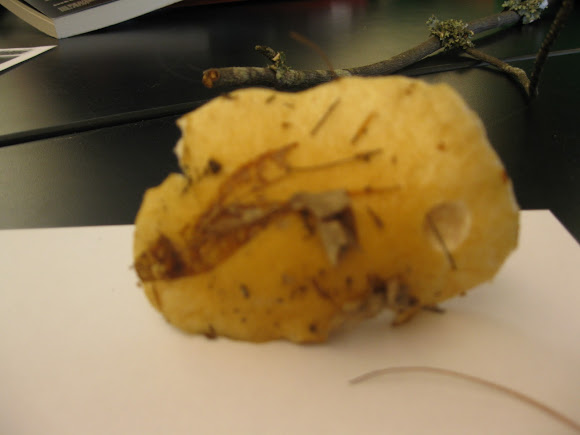 The mushroom I think I found is called Catathelasma imperiale and it has gills running down the stem which the mushroom I found has most of the stem was under ground and the Catathelasma imperiale stem is often buried it was found under a conifer which also resembles with the Catathelasma imperiale it has a white spore print. It was found under a conifer in a bunch of leaves.Basidiomycetes-Agaricales-Tricholomataceae-Catathelasma. I found it while walking in the woods at school searching for mushrooms and I was kicking leaves up to look under and there it was. http://www.mushroomexpert.com/catathelas... was the main site I used, I also used wikipedia but I did not find the mushroom there but came close. lat. 43.583186 long.-70.702104 elevation 100m. We had a little bit of snow on the ground when we found it sometime in november. It the ground was really wet and when we picked it was very sticky and felt like slime it was a little muddy around it also. It had a collar, it had a few other mushrooms around it, There were oak and pine trees around it. It was a medium sized mushroom