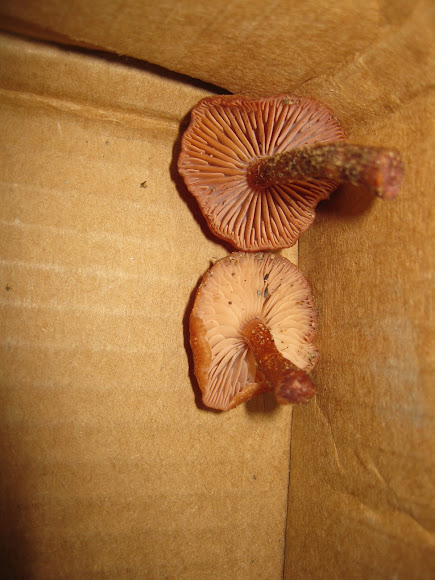 The mushroom had an Orange Cap, a Cream/Orange stalk, it was In a sandy, mossy area on the edge of dense woods, Attached gills, Cream spore color, No collar, Circular cap shape, the cap and stalk were covered with a slimy film and there was no aroma from the mushroom.

On the edge of a dense forest of pine, birch, oak, trees. It was on the side of a hill.

11/13 We went out to look for Fungi and found an Orange mushroom on the edge of the woods. We cut it from the bottom of the stem and brought it inside to find out it’s spore color. The mushroom was in a sunny spot on the edge of the woods. The soil was moist and sandy with small amounts of moss. The mushroom was about 5cm tall and the cap was around 3.5cm wide. It was low humidity and about 18 degrees celsius outside. The Kingdom of the mushroom isfungi,the Phylum is basidiomycota the class is Basidiomycetes the order is Agaricales The family is Hygrophoroceae the genus is Hygrophorus The species is Golden Waxy Cap. The evidence that it is in this group and is this species is that it has been identified as golden waxy cap by many websites and also has the same characteristics (orange cap, cream/orange stalk, etc) and is found in the same place as described by many.

I think you should have more pictures of the area.

Maybe next time you could show us more pictures so that this mushroom would be easier to identify. You did a nice job describing you mushroom and telling us the temperature outside.

Good job, you surprisingly have the same mushroom as me! Good picture. (get more pictures next time, it helps people to identify)