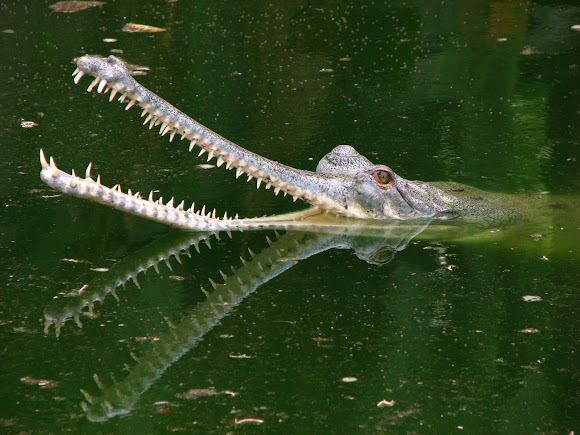 "The gharial, also called Indian gavial or gavial, is the only surviving member of the once well-represented family Gavialidae, a long-established group of crocodilians with long, slender snouts. The average size of mature gharials is 3.5 to 4.5 m (11 to 15 ft). The maximum recorded size is 6.25 m (20.5 ft). Hatchlings approximate 37 cm (15 in)."

"Gharials once thrived in all the major river systems of the Indian subcontinent, spanning the rivers of its northern part from the Indus in Pakistan across the Gangetic floodplain to the Irrawaddy in Myanmar. Today their distribution is limited to only 2% of their former range."

"Gharials are exceeded in size only by the Saltwater Crocodile. Since 2007, the species is listed as Critically Endangered on the Red List of Threatened Species issued by IUCN."

great shots, and a beautiful animal.

The gharial, despite having an impressive number of sharp teeth, is not aggressive, and its bite is extremely weak. Populations of this unique member of the crocodile family are unfortunately declining rapidly due to poaching and water pollution, and the species is listed as a Critically Endangered by IUCN.

O my what big teeth you have! Great photo!

that's a lot of teeth!

A weird crocodilian with a pot for a nose (males) and severe orthodontic issues.
Good spot.

Stunning photos of a great spotting - thanks for sharing, and congrats!

Please add to Reptiles of the World mission..

That is an insane encounter!!! Incredible!

Congratulations Rachael! This photo was selected as Spotting of the Day!

"Exceeded in size only by the Saltwater Crocodile, the long and slender-snouted Gharial is a critically endangered crocodilian found in India and Nepal."

@S Frazier: this guy was actually part of the breeding program they have within the Chitwan NP. There's some interesting info about it here:http://www.gharialconservation.org/PDF/CADI%20NEPAL%20Gharial%20report%202005.pdf
They say that the Gharial is one of the seven of the most threatened crocodiles in the world.

Hello. Do you remember anything about the habitat? Thanks