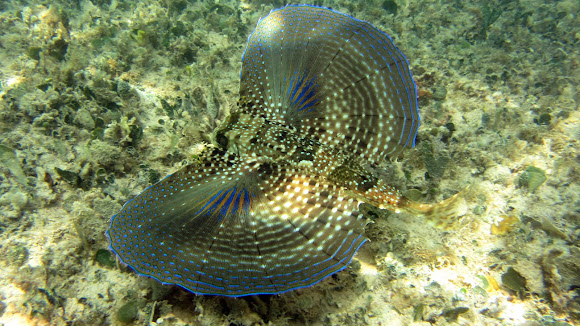 Photo taken at -20 ft near the coast. this is also a spotting of a life time for me,one of the most interesting fish i have seen. They have been observed to "walk" along sandy sea floors while looking for crustaceans and other smal invertebrates by using their pelvic fins as it show in the video.

Found on sand, mud or over rocks in sandy areas, exploring the bottom with the free part of the pectoral fins. Feeds primarily on benthic crustaceans, especially crabs, clams and small fishes. Eastern Atlantic: English Channel to Angola, including the Mediterranean, Madeira, and the Azores. Western Atlantic: Canada to Massachusetts, USA and the Gulf of Mexico to Argentina.

This is my very first spotting in Project Noah!

Thanks Hunter ,gatorfellows and Ali :)

Wonderful, thank you for sharing this special shot.

What an incredible fish! Really neat shot. I'd love to do some underwater photography.

Thanks Vale your so kind:):)

Thanks Antonio indeed how can i forget this guy is one of my favorite spots in all my life and open the door to this community. I´m in peace whit my self.
Thanks for remain me my friend :):) why i´m here.

AntónioGinjaGinja
5 months ago
beautiful photos,welcome to project noah :)
Remember Gerardo?of course,you where a sucess from the first one,one of the most amazing spottings pages i've ever see,great super dificult(underwater) work,thanks for sharing and for beeing allways there for all who need,congratulations my friend

This is such a neat fish! Thank you so much for sharing this spot!

Thanks Kat and Gretel!

I saw one of these in Shark River in New Jersey once.

Thanks Uncle, Saabrigger, Craig, Marta, Annavan, Sachin, Satyen, Bong, thanks to you all for your grate comments,and ID´s, I learn allot form all of you.

and 59 other people favorited this spotting