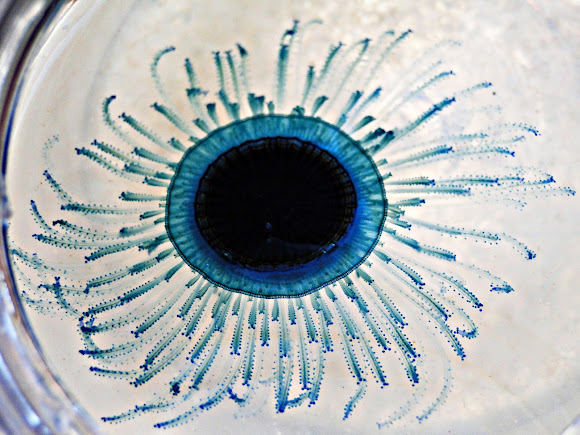 Porpita porpita, commonly known as the blue button, is a marine organism consisting of a colony of hydroids found in tropical waters from California to the tropical Pacific, the Atlantic and Indian oceans It is often mistaken for a jellyfish, but although jellyfish and the blue buttons are part of the same phylum (Cnidaria), the blue button is part of the class Hydrozoa.

THANKS A LOT!!! I REALLY APPRECIATE YOUR COMMENTS :D

Awesome picture, Occasionally I see these on the beaches of South Padre Island, TX!

Congrats on your SOTD award

Beautiful photo and information, AND it's scientific name makes me smile because it's a duplicate: Porpita porpita!

I've always wanted to see one of those! Awesome find!

Wow that is AWESOME!!! Good job!

Congratulations Tavo and thanks for showing me something entirely new. What an amazing creature.

Looks like a child's painting... So cool! Congratulations Tavo for the SOTD!

that is so cool