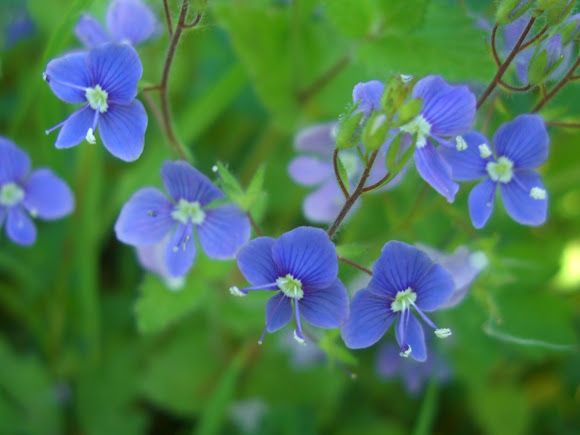 Veronica chamaedrys (germander speedwell, bird's-eye speedwell) is a species of Veronica, native to Europe and northern Asia. It is found on other continents as an introduced species. It is a herbaceous perennial plant with hairy stems and leaves. It can grow to 25 cm tall, but is normally about 12 cm tall. The flowers are deep blue, 8 to 12 mm wide with a zygomorphic (bilaterally-symmetrical) four-lobed corolla. The blossoms of this plant wilt very quickly upon picking, which has given it the ironic name "Männertreu", or "men's faithfulness" in German. Germander Speedwell is also a common, hardy turf weed when it invades turf and lawns. It creeps along the ground, spreading by sending down roots at the stem nodes. It is propagated both by seed and stem fragments. Leaves may defoliate in the summer and winter but the stems will grow again next season. Unlike at least five other common speedwell turf weeds such as corn speedwell (Veronica arvensis), the leaves are opposite both on the upper and lower parts of the plant.See the Veronica for special weed control considerations. Veronica chamaedrys herb has been used in the traditional Austrian medicine internally (as tea) for treatment of disorders of the nervous system, respiratory tract, cardiovascular system, and metabolism. (Wiki)