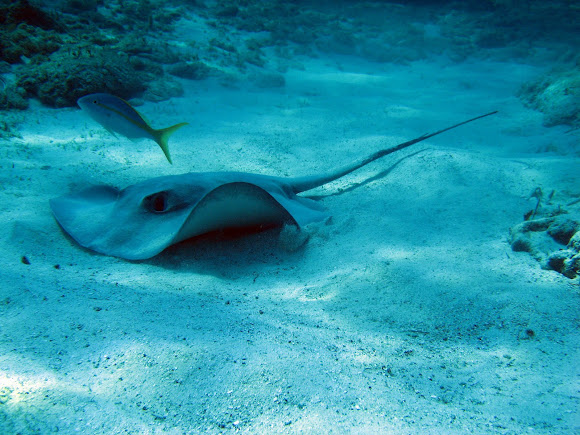 Photo taken at -50 ft In Caribbean reef. It has an oval pectoral fin disk with a long, broad-angled snout; the front margin of the disk is almost straight. The mouth is arched with indentations at the symphysis and five papillae on the floor. The teeth have elliptical bases and flattened cusps with a scallop-edged central depression. The upper jaw contains 28-36 rows of teeth. The tail is relatively short and slender, without fin folds but having subtle ventral and lateral ridges towards the base. There is a single saw-toothed spine located on the latter half of the tail. The upper surface of the body and tail are covered with small tubercles; there are large tubercles with four radiating ridges each on the shoulder region. The coloration is dark brown to olive above and yellowish white below, darkening to blackish towards the tip of the tail.

Found in the western Atlantic Ocean from the Gulf of Campeche to Brazil, including the Antilles. usually in shallow waters even near the coast.