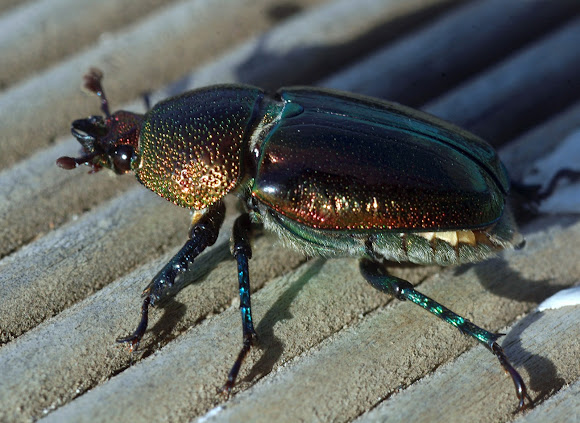 The Golden stag beetle (named for the color of the male and his large antennae) is most frequently called the Christmas beetle here in Australia, because it hatches out around Christmas time and because it is brightly colored like a Christmas decoration.

In this instance, dry sclerophyll bushland, but found in much of Australia.

This is a female. Unlike the golden males, the females tend to be green and orange, with blue legs.

Yes Japh, the common name Christmas beetle is more likely to mean the other beetle you linked to. However, any colorful beetle that appears around Christmas time is likely to get called a Christmas beetle. It took me a while to find that this was the (female) Golden Stag Beetle, because the male has the characteristic color and "stag" antennae: http://www.projectnoah.org/spottings/326...

Lovely spotting Lori. I need some advice about shooting beatles. I am using a 150mm macro lense and flash but the flash is killing all the photos. How do i get better results with the beatles...I want to maintain the natural colors there bodies present. If you prefer, you can write me larrygraziano@gmail.com

Fabulous! One antenna looks a bit down in pic2 though. ;)