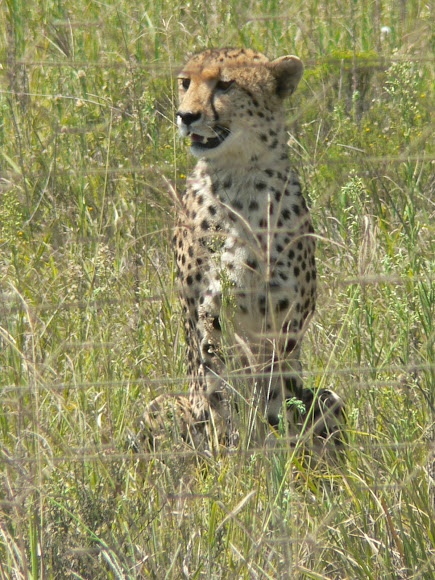 The smallest of the "big" cats, & the fastest land mammal.

We were barely 20 minutes out of Port Elizabeth airport when I caught site of this guy right up against the perimeter fence of one of the game reserves. I simultaneously yelled at the driver to stop & grabbed my camera & hung out the window to fired off a few shots. Unfortunately by the time we had turned the taxi round & returned to the spot he had moved on. These aren't great photos but I love his obvious interest in us as we sped by! This was also my first sighting of a one of these wonderful creatures in the wild.

Thank you Marsya! They are my favorite of big cats too!

Great spotting! I've loved cheetah since I was in elementary school

They are very fragile compared to the other big cats. I didn't realise they were prone to fractures though that makes sense. They do have a high mortality rate from lions killing the cubs & even the adults, presumably because they see them as competition. The females are especially vulnerable as male siblings will often hang out together.
The ancient egyptians used them for hunting very much as dogs are used today! I remember seeing paintings inside one of tombs we visited!

They are quite fragile aren't they? Very fast runners but prone to fractures. I read that when they are upset ,they start making bird calls.

What an amazing photo of such a beautiful animal