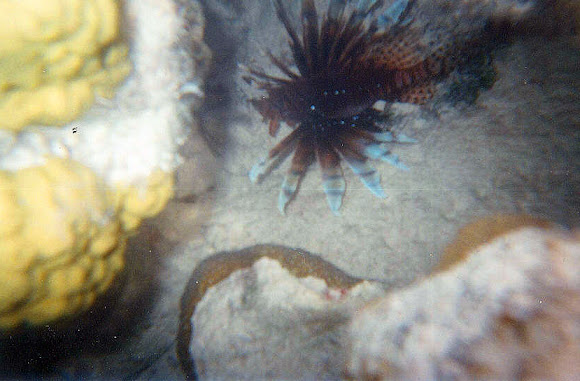 This one was 20-30cm big. I notice there is one every coral group,in Mahahual,near the coast there is a barrier reef with shallow waters and groups of corals. In almost each one theres a Lionfish, and around a lot of fish beacause i thing they feel protected around him :)

This fish is originally form the Indo-Pacific oceans, but in the 90's after hurricane Andrew passed over the east coast of the united states,it escaped from an aquarium and since then it has become an invasive especie in the east coast of the states and the Caribbean. "I was swimming and suddenly I saw one! It seemed strage cause i knew the fish lived only in the Indo-Pacific area,afterward I researched and I discovered it is a plage in the Caribbean! they organize annually fish tournaments for killing them "