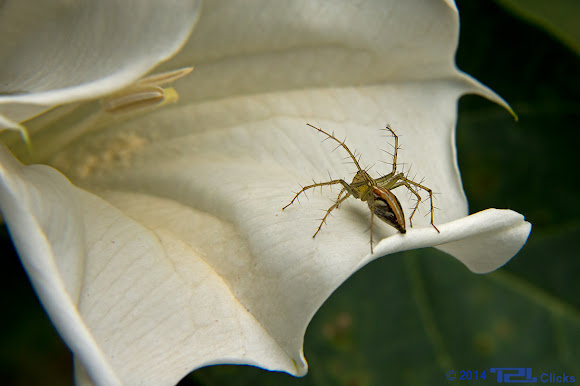 Lynx spider is the common name for any member of the family Oxyopidae. Most species make little use of webs, instead spending their lives as hunting spiders on plants. Many species frequent flowers in particular, ambushing pollinators, much as crab spiders do. They tend to tolerate members of their own species more than most spiders do, and at least one species has been identified as exhibiting social behaviour.

There are several genera of Oxyopidae and they differ in their habits and adaptations. Most of them have large spiny bristles on their legs and in many species the bristles form almost a basket-like structure that may assist in confining the prey that they grasp, and protect the spider from its struggles.

Lynx spiders, in spite of being largely ambush hunters, are very speedy runners and leapers, alert and with good vision. Except when defending egg purses, many tend to flee rapidly when approached by predators or large creatures such as humans

Moved this lynx spider to the Arthropods category. :-)