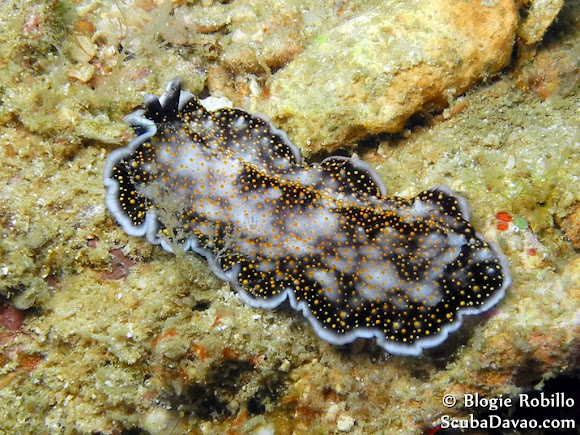 Also known as Yellow Papillae Polyclad Flatworm, Yellowspot Polyclad Flatworm, and Gold-speckled Flatworm. They feed on ascidians and shelled molluscs, and grow to a length of about 7cm. They feed by placing themselves over their victims and sucking in their prey, through a tube-like extension in its mouth. Flatworms can move fast along the bottom by rapidly oscillating tiny hairs which act like millions of feet that propel them along in an undulating manner. Many flatworms are confused with sea slugs, and visa-versa.

Found singly or in pairs on coral and rocky reef over rubble areas, up to depths of about 20m. Widespread in the Indo-Pacific region.

This flatworm was photographed at a depth of about 45 feet, at a dive site called Basti's Reef, off the western coast of Samal Island, Philippines.

Welcome..Blogie.. Your efforts reflecting in such great spottings...