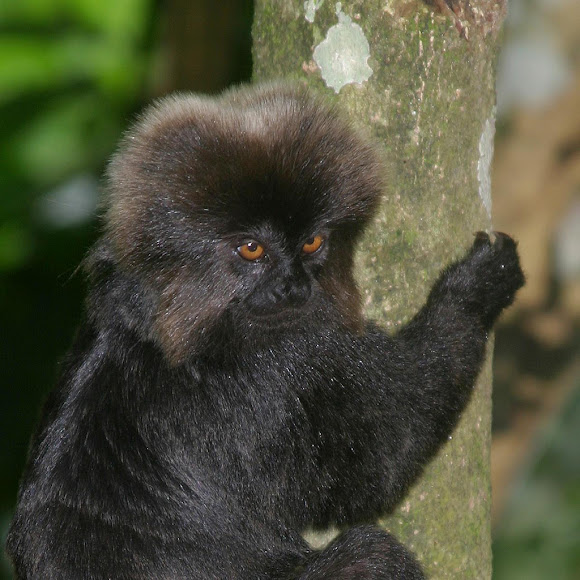 Goeldi's Marmosets prefer to forage in dense scrubby undergrowth; perhaps because of this, they are rare, with groups living in separate patches of suitable habitat, separated by miles of unsuitable flora. In the wet season, their diet includes fruit, insects, spiders, lizards, frogs, and snakes. In the dry season, they feed on fungi, the only tropical primates known to depend on this source of food. They live in small social groups (approximately six individuals) that stay within a few feet of one another most of the time, staying in contact via high-pitched calls. Source Wikipedia

The first who described this species was Emil Goeldi, of Swiss origin, later Swiss-Brazilian citizen, which was born quite near where I grew up myself. http://en.wikipedia.org/wiki/Emil_August... Actually unlike from the german name might be expected is not a kind of tamarin. They have unlike other species of Callitrichidae 6 molar teeth in both the maxilla and mandibula.

Looks like he just woke up on the wrong side of the bed (tree) :-)

Lovely Organism... Its very nice to see Mammal species across the world. They are precious. Thanks Bayucca for sharing here on Project Noah...
Is this one angry with you as you disturbed his privacy...?

Amazing Spotting Bayucca!! what a great list of information you have provided as well! Extremely informative! I really love the hair and how cute this little one is. :-)

Thanks for adding your photos to our mission! We just launched it today and are thrilled to already have you posting your photos and descriptions from Loreto Peru.

I've only been offline a few days, and in the meanwhile you become all famous on Noah ;-)
Tillykke ^^
Sød lille abe :)

Congratulations bayucca! It's always a thrill for me to to see a new species for the first time, whether in reality or on Project Noah.
Also, your note on the molar teeth is betraying your professional identity :-)

Congratulations pal. It is a great spot.

Ehm... My little monkey friend, you are famous as I told you in a previous comment, before getting spot of the day ;-)...!
I am very flattered and honored! Thanks you so much and thanks folks for your nice comments, much appreciated!! Have a wonderful spotting day!!