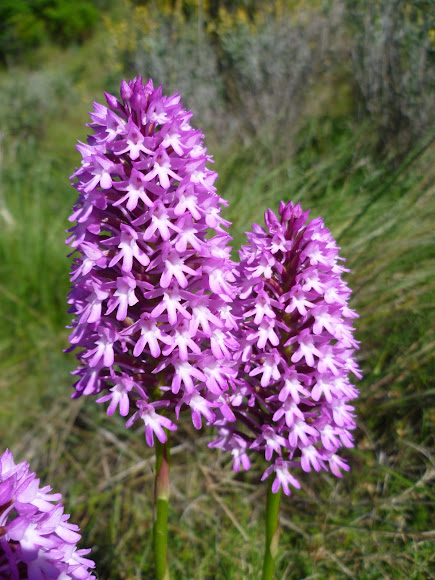 The arrangement of hermaphroditic flowers in a compact pyramidal shape is very distinctive and gives the orchid its common name. The colour of the flower varies from pink to purple, or rarely white. The flowering period extends from April through July.

Anacamptis pyramidalis requires a sunny spot on diverse soils: loamy or clay. It can even grow on very alkaline soil. It can be found on meadows or dry and well exposed slopes, at an altitude of 0–2,000 metres (0–6,600 ft) above sea level.

The flowers are pollinated by butterflies and moths. To ensure the fertilization, their morphology is well adapted to the proboscis of Lepidoptera. The mechanism by which its pairs of pollinia attach themselves to an insect's proboscis was discovered by Charles Darwin and described in his book on the Fertilisation of Orchids.

sorry! i've been busy with my exams....
i know that this group of moths is also in Spain, but i've never seen one!
but i will wait till the ancamptis is flowering to see if i can see some

do you know which butterflies and moths you've seen visiting these Patricia? I've seen Burnet Moths in the UK and I wondered whether this group of moths also do the business in Spain? http://www.projectnoah.org/spottings/768...

Oh! I want to be there now!